I’ve been seeing an awful lot of shows lately that I can’t quite decide how I feel about.  The Scottsboro Boys is another one of those tricky creations. 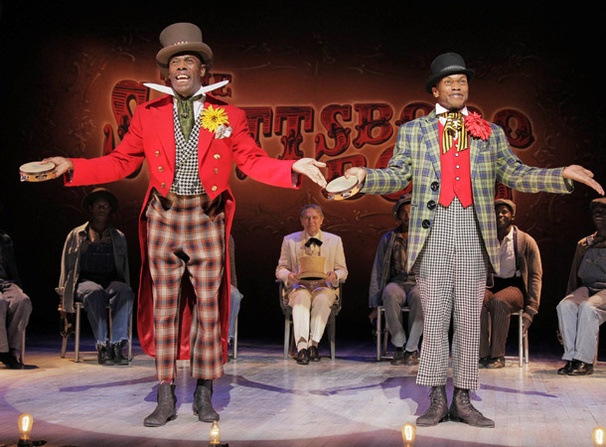 The subject matter is much heavier than your typical Broadway musical.  The play begins in the Spring of 1931 when nine African American boys – ages 13 – 19 – were falsely accused and arrested for raping two white women and follows the course of their multiple trials and eventually their deaths…all sandwiched between big, beautiful musical numbers.

I spent the first ten minutes trying to wrap my brain around what was happening on the stage below me.  Maybe it’s just my southern upbringing, but I always have these huge gut crushing reactions to anything that might seem even slightly dismissive of the civil rights movement or glorifying of slavery.  I imagine it’s much like a German citizen being afraid to voice their love of their country for fear it would be taken as an endorsement of Hitler.  How do you marry your fierce love of your home with it’s horrible past?

Because those reactions were so visceral and immediate, I found I had to coach myself through the beginning of the show, reminding myself that the creators were intentionally playing on those types of reactions to drive home their message, furthering the racial stereotypes and blind bigotry of the tale by utilizing the minstrel fashion to tell the story.  Despite all my rationalizing, I still found myself holding my breath when the cast took the stage for the finale in blackface.

As the lights of the house came up, the woman next to me leaned in and asked, “Did you enjoy the show?” beaming from ear to ear.  I’m pretty sure I nodded in the affirmative, but I don’t think “enjoy” is the word I would use.  I “enjoy” spending cold, rainy days hiding underneath a down comforter.  I “enjoy” swimming in a lake the temperature of bath water.  I “enjoy” the Twilight series.  I don’t “enjoy” watching the lives of nine innocent men destroyed and being reminded of the injustices we are capable of inflicting on our fellow men.

And yet, the production was beautifully done.  The cast was exquisitely talented and in the case of Joshua Henry (the actor that played Haywood Patterson) handsome enough to cause spontaneous licking.  The music was strong and memorable.  Then again, I’m always a sucker for intricate harmonies.

There’s ample comic relief, if you can let yourself embrace the racially charged jokes.  So while I’m not going to bill it as the feel good musical of the year, it’s a powerful piece of theater that still has me thinking.  Here in the liberal NYC area, it’s easy to become complacent and forget how many people still struggle for their basic civil rights.  I’ll be thinking of those Scottsboro Boys when I hit the poles polls today.

30 thoughts on “The Scottsboro Boys”